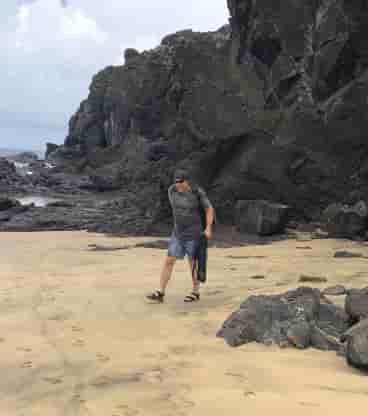 No bones about it, the cruising world is a very extensive culture and one that is new to me. And as is perhaps always the case, when you’re suddenly immersed in a new culture, you notice things that you might not notice in your familiar home environment.

So we’ve now dealt with local port authorities and personnel in three countries: South Africa, Saint Helena, and Brazil. A number of different folks in each: harbormaster, customs officers, immigration officers. All three of us: Dunbar the captain, Irene the owner, and Rory the crewman, go together to these offices. We hand over our passports and ships documents, we fill out forms, blah blah blah.

The amusing thing about this is that consistently these officials primarily address Rory. By default, he is assumed to be the authority figure and responsible party. They ask him questions, they hand him documents, they want him to sign things.

Why should this be? Through no action of his, I hasten to say. I’m 99% sure that it’s because he’s got grey in his beard and hair. He’s a white guy with grey hair, and therefore, he is in charge.

I find this hilarious. Because if I didn’t I’d find it annoying as hell.

It’s a consistent thing though. One of the guys on my team has white hair. When we went out to dinner as a team, the waiter by default handed him the bill. He made a point of handing it to dark-blue-haired me (standard practice at Amazon, highest ranking person at the table pays), which visibly embarrassed the waiter. At the time this barely blipped my radar, because it’s just so normal. But it shouldn’t be.

2 comments on “Symbols of authority”